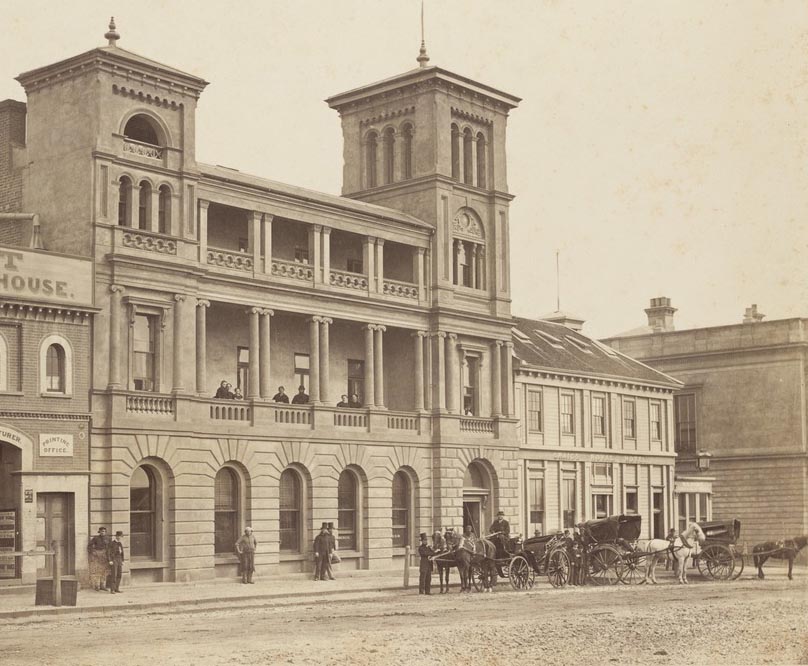 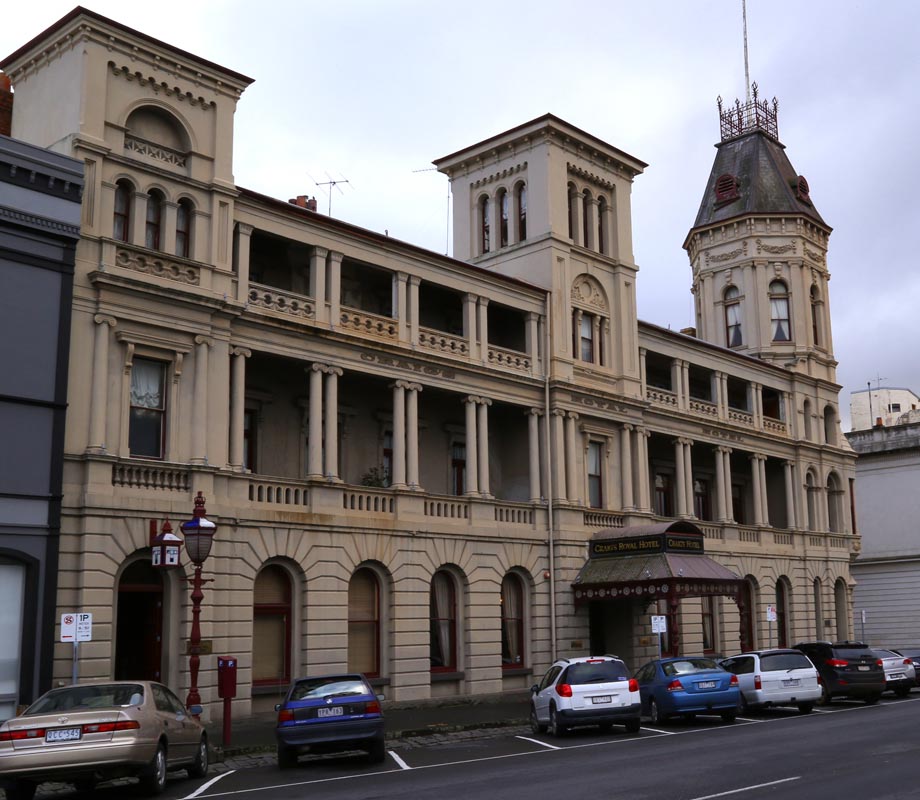 Craig's is one of the most historic hotels in Ballarat, and is significant as the site of the Royal Commission into the Eureka Stockade, a temporary Ballarat Town Hall, the scene of a huge ball with fugitive American Civil War fighters, the workplace of famed poet Adam Lindsay Gordon, resting place for the visiting Mark Twain, and birthplace of the Melbourne Racing Club, originators of the Caulfield Cup.
Originally built and opened as one of the earliest licensed premises as the Ballarat Hotel in 1853, Walter Craig purchased the building from Thomas Bath and re-opened it as Craig's in 1857.
In 1865 the sudden arrival of the CSS Shenandoah, a Confederate cruiser running as a pirate raider in the US Civil War, docked in Melbourne, and a delegation of officers headed to Ballarat

The wealth, beauty and fashion of Ballarat were out in full force... every attention that kindness and courtesy could suggest was shown us, and more than one heart beat quicker at such convincing evidence of the existence of sympathy in this country of the Antipodes, for the service in which we were engaged. Many a grey uniform coat lost its gilt buttons that night, but we saw them again ere we bade a final adieu to Australia, suspended from watch guards depending from the necks of bright-eyed women..." Cornelius Hunt, The Shenandoah

But it was the brief stay of Adam Lindsay in Craig's stables along Bath Lane that links this street to one of the greats of Australian literature. Adam Lindsay Gordon, known later as the 'national poet', moved himself, his wife and his newborn daughter to live in a cottage here after living in Robe, South Australia.
In 12 turbulent months from November 1867 he rented the livery stables business with a partner, he suffered a head injury from a horse, his newborn daughter died, his business failed... and finally he won three races at the Melbourne Hunt Club steeplechase meeting in October the next year.
His original cottage has been preserved in the Ballarat Botanical Gardens, and Craig's is preserved in Adam Lindsay Gordon's poem Banker's Dream:

At the road once again, pulling hard on the rein,Craig's pony popp'd in and popp'd out ;I followed like smoke, and the pace was no joke,For his friends were beginning to shout.

At Craig's Gordon was also a close companion with the brother of Herbert Power, who was one of the six thoroughbred owners who gathered at Craig's Hotel one night in 1875 and formed the Victorian Amateur Turf Club.
The first Victorian Amateur Turf Club race was run at Dowling Forst, outside of Ballarat - before moving to Caulfield, and becoming the Caulfield Cup.
There's local talk of a ghost and things that go bump in the night in the cellars of Craig's... and there's the legend of the hotel's namesake - and his love for racehorses - which lingers...In 1870 Walter Craig was said to have dreamed of his horse Nimblefoot winning the Melbourne Cup, but in the dream when he approached the rider was wearing a black armband.Sure enough, Walter Craig's horse Nimblefoot won the Melbourne Cup in 1870 - some three months after Walter Craig died. The jockey wore black armbands to mark Craig's passing.

Have a wander down Bath Lane to see the doors to the original stables, and then we head back down Lydiard Street and back onto Sturt Street for our next stop at the Town Hall. 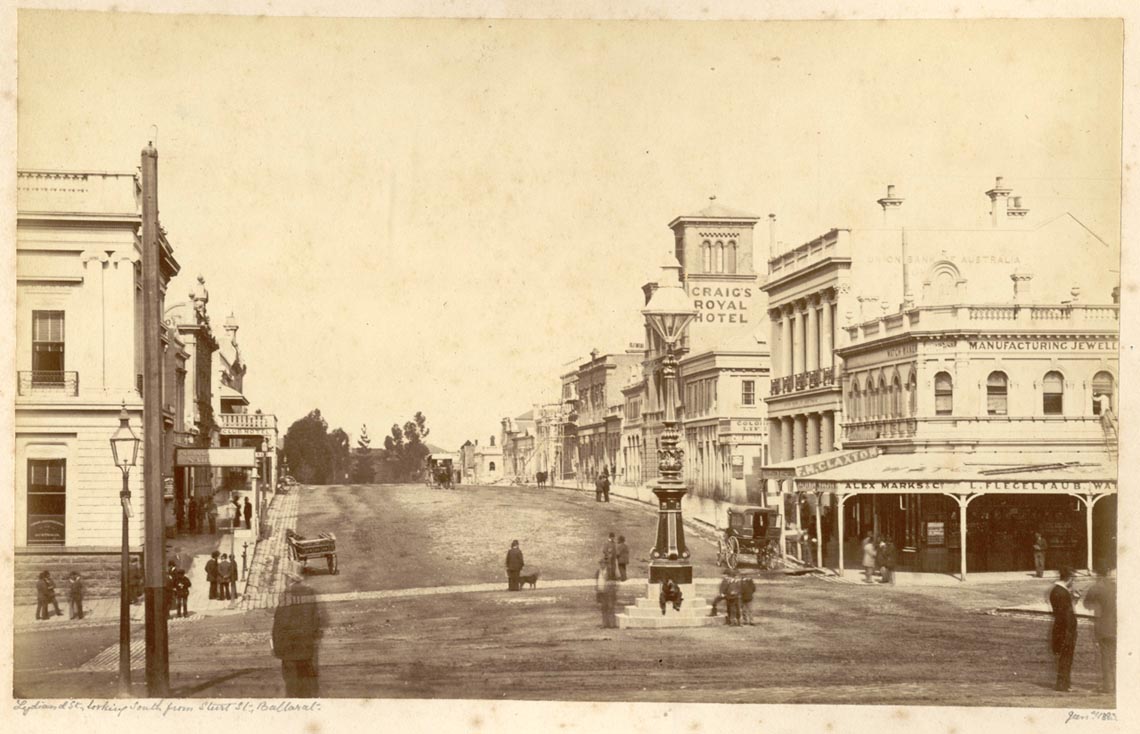 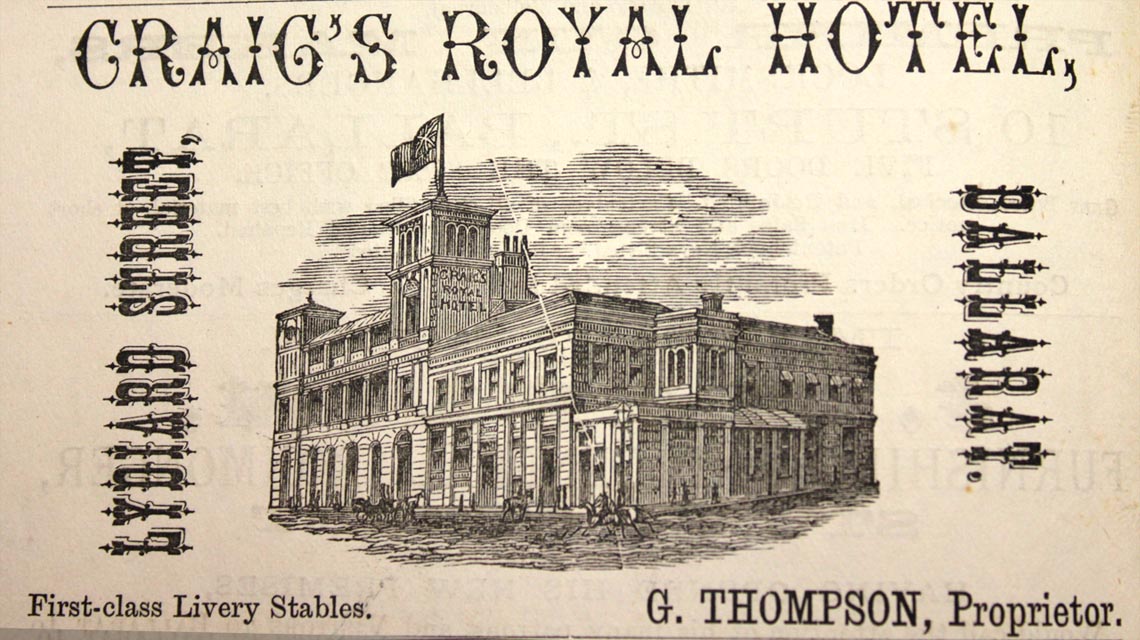 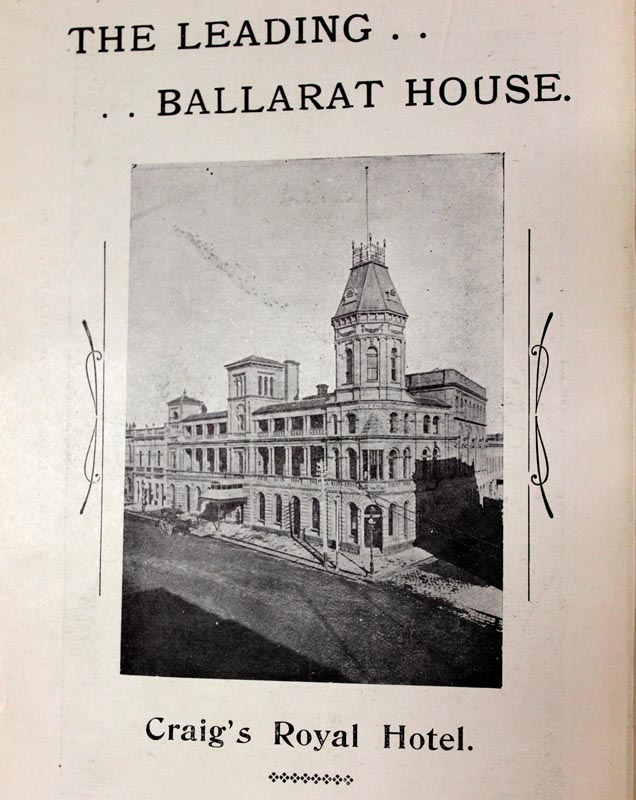 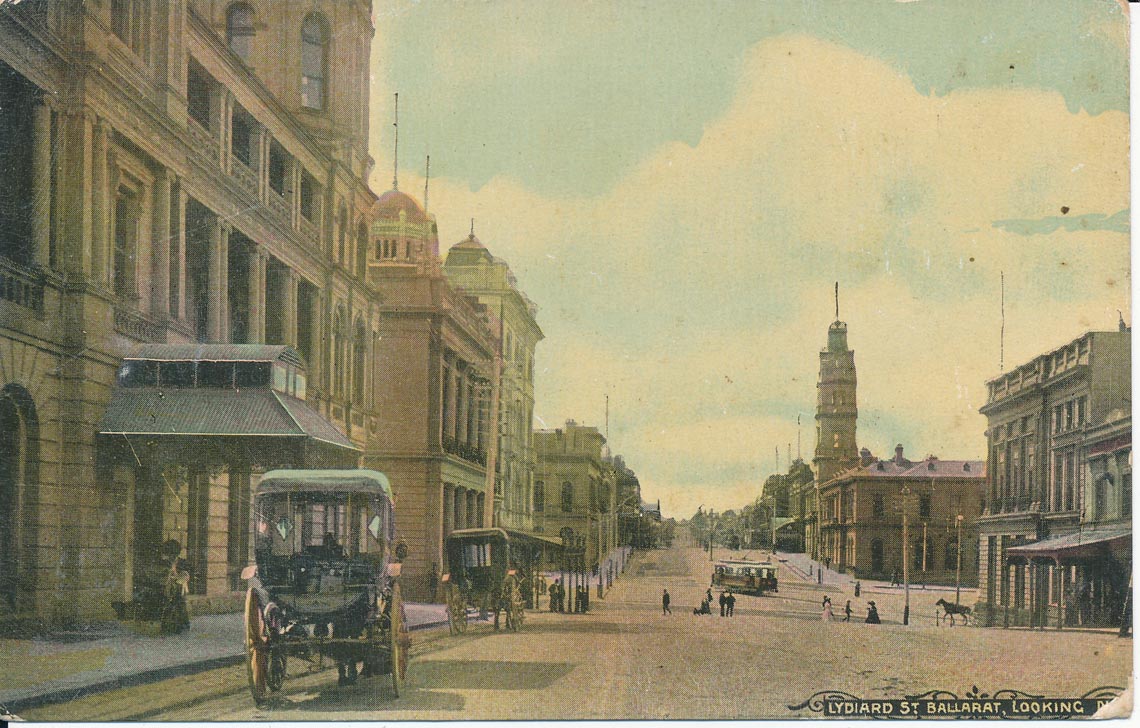 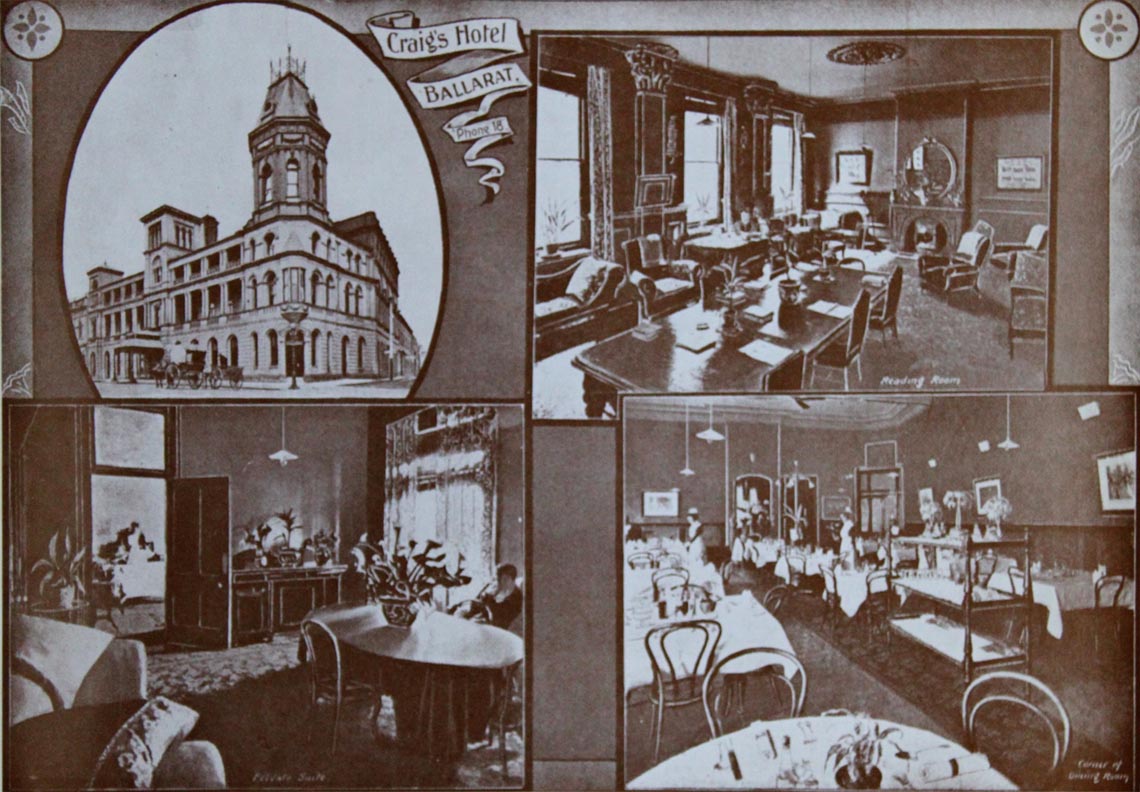 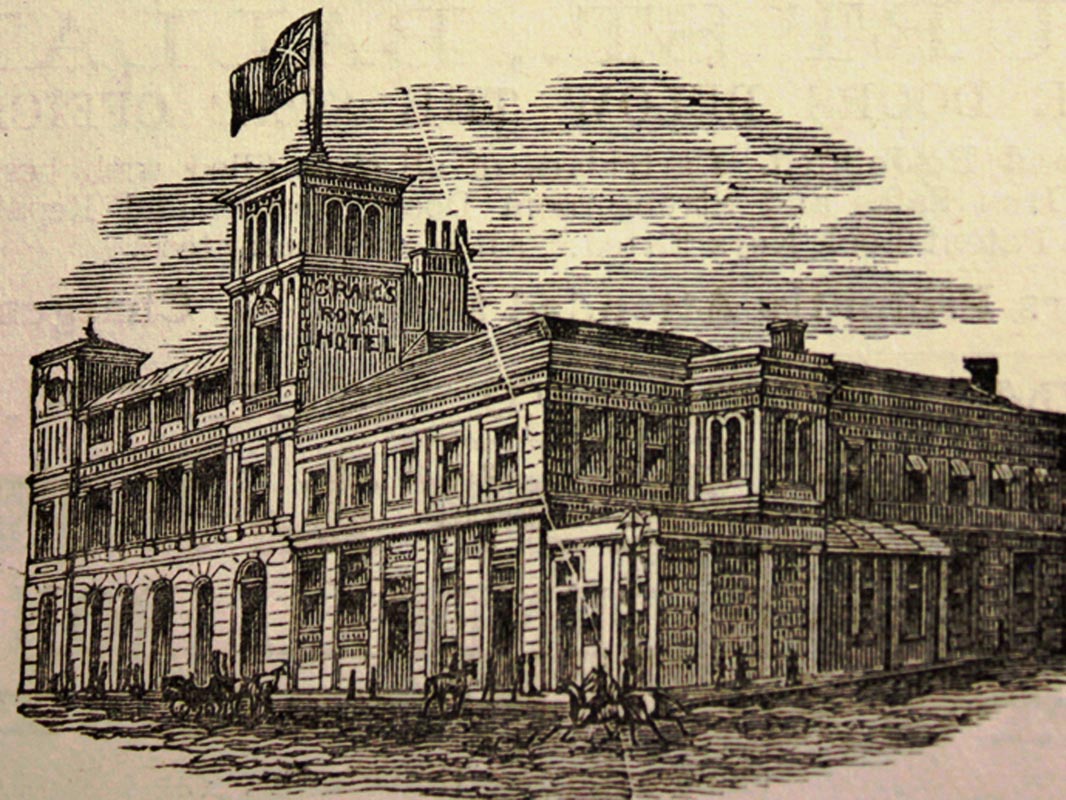 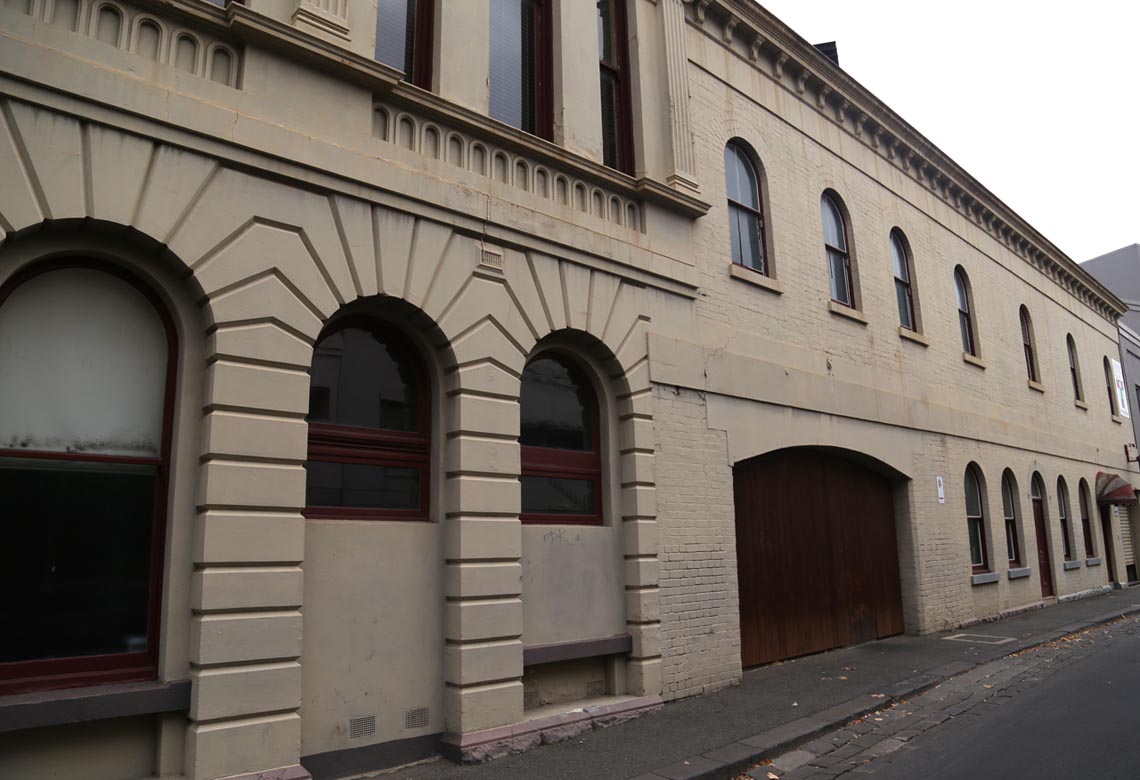