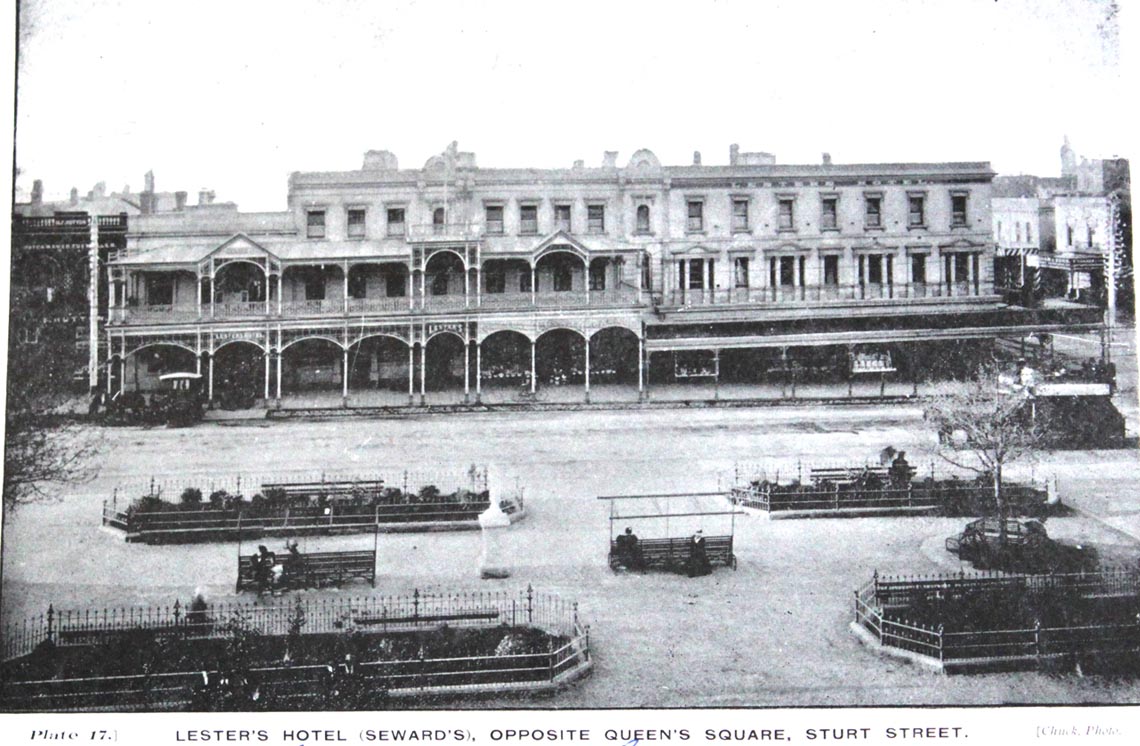 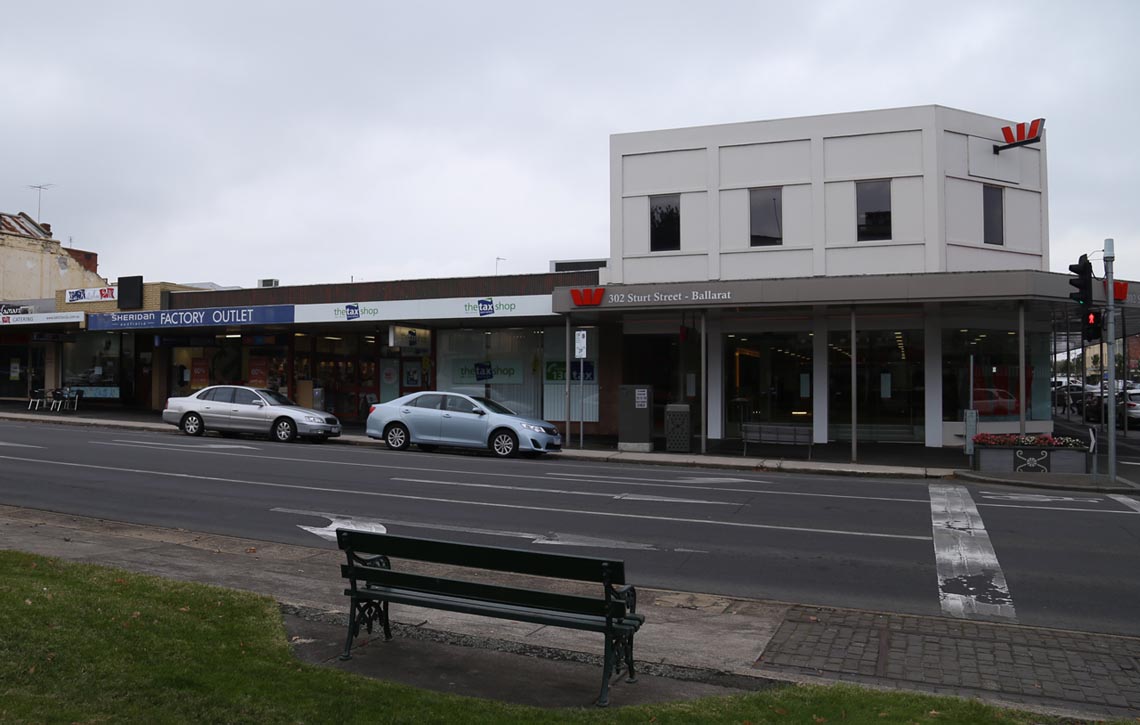 Instructions Drag the line left or right to reveal what this grand corner looked like many decades ago.
Show More

The building on this corner began its life as Criterion House, before growing from a drapery into a three story department store alongside one of the more famous hotels in Victoria. Imagine now a first floor verandah for a three-story building on this corner, people reclining on lounge chairs with a refreshing drink, while a busy department store operates next door...
David Jones, a draper from Somerset, opened his business on this corner a couple of years after his previous Main Road business burned down in 1858, calling the grand two story building Criterion House.


This palatial business building is the finest retail shop in the colony. Not even in Melbourne can its equal be found."Ballarat Star, 1861

It is said that Mr Jones was a bachelor that lived above his shop, entertaining celebrities from the stage who visited the city including 'Madame Caradini, Armes Beaumont, (then in his prime), Montgomery and others.'

Alongside Criterion House were Cafe Tortoni and the Rainbow Hotel, before 1862 when the grand Lester's Hotel was opened.
The leasee of the Rainbow Hotel before it became Lester's was T.S Bellair, an established actor from England, who had moved to Sydney in 1853 to take up a two year acting engagement with the Victorian Theatre in Sydney.

Mr. Bellair will be remembered by old Victorians us a sterling actor, who made his first appearance in Melbourne, at the Royal, as Gratiano in the " Merchant of Venice," Mr. Bellair joined Mr. Coppin in the Olympic Theatre... and afterwards became joint lessee with Mr. W. Hoskins of the Theatre Royal, Ballarat. After that Mr. Bellair was the first lessee of Lester's Hotel, Ballarat, which he kept for eight years, on leaving which he took a dramatic company to Calcutta..."Wagga Wagga Advertiser, May, 1893

Alfred Lester had worked as publican of the Free Trade Hotel in 1856, near the site of the Eureka Stockade, before taking over the moving alongside Criterion House as licensee of what became Lester's Hotel in 1861.

In 1881 the Tunbridge's Furnishing Arcade, an extension of the Tunbridges timberyard on the corner of Doveton and Sturt Street replaced Criterion House. A small factory complex bwas uilt behind the buildings where a small team of upholsterers, cabinet makers, and French polishers and mattress makers worked.

In 1916 the new owner of Lester's, L. Remington surrendered the liquor license for the building, owing to economic depression and downturn in business. Several shops as well as a Returned Soldier's Institute to help the war wounded back into civilian life opened in the hotel's buildings. In 1920 Tunbridge's purchased the Lester's Hotel buildings at auction.

By 1900 both buildings had grown to three storeys high; some 60 years later they were demolished. 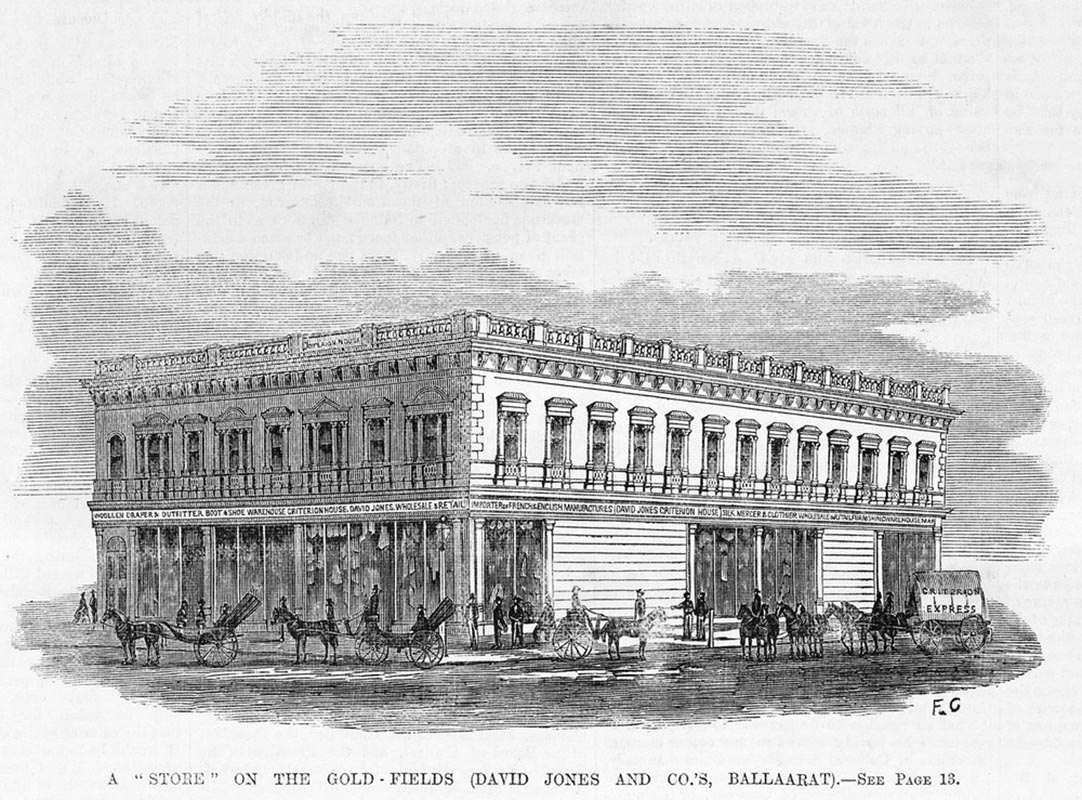 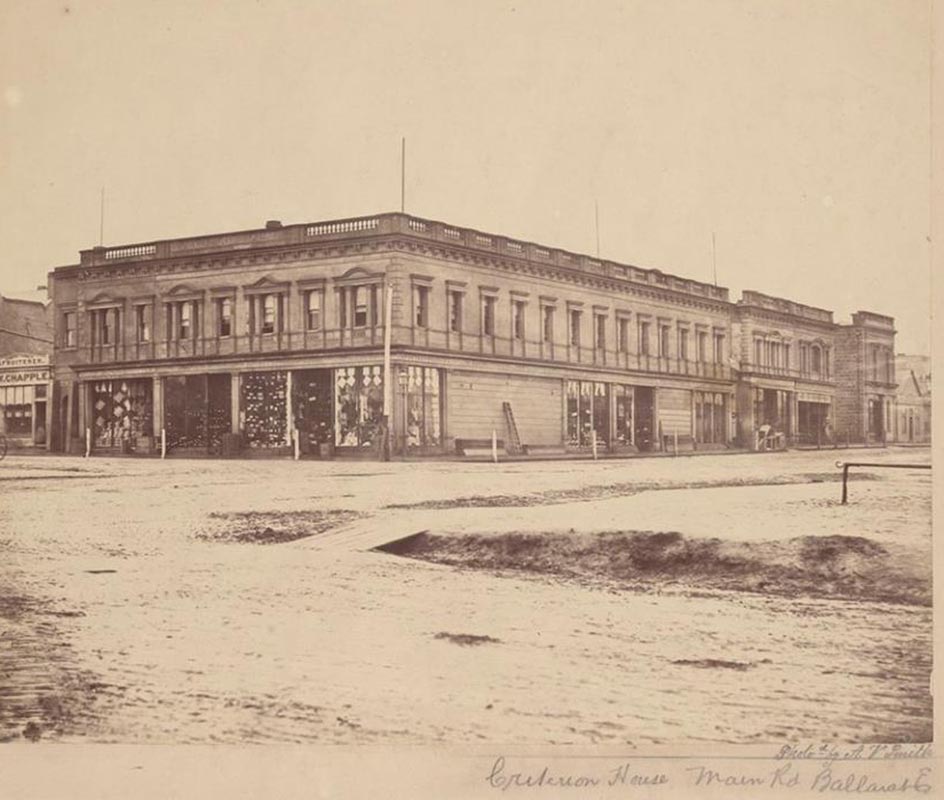 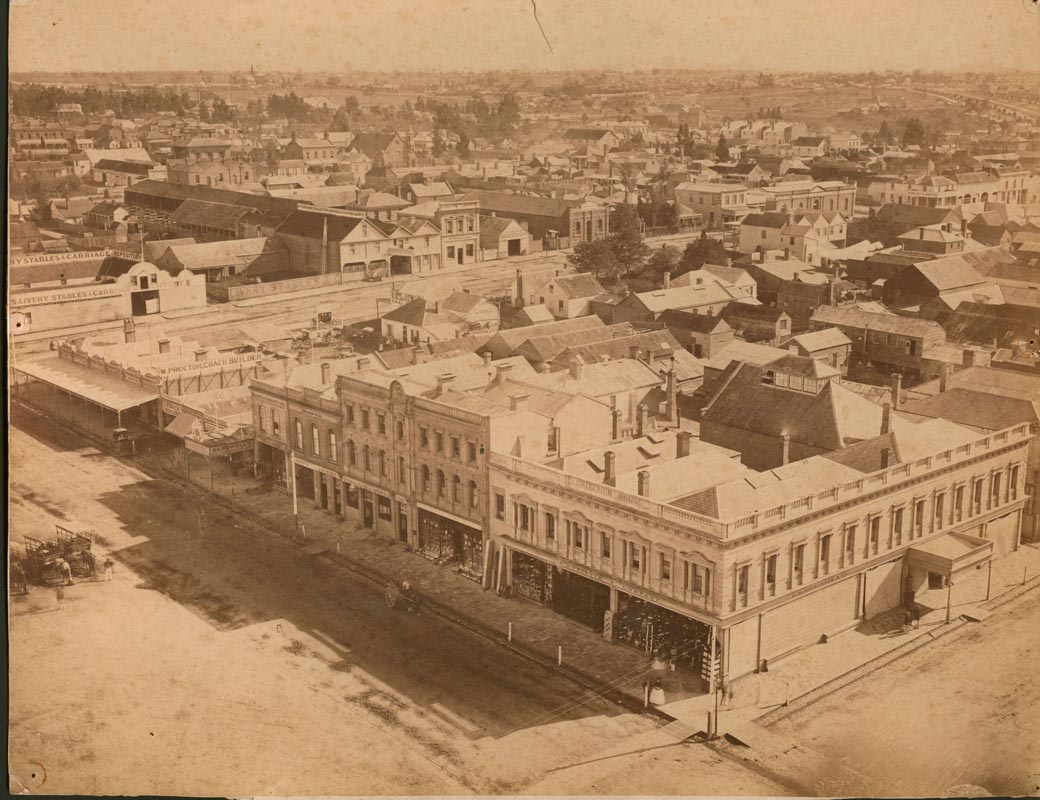 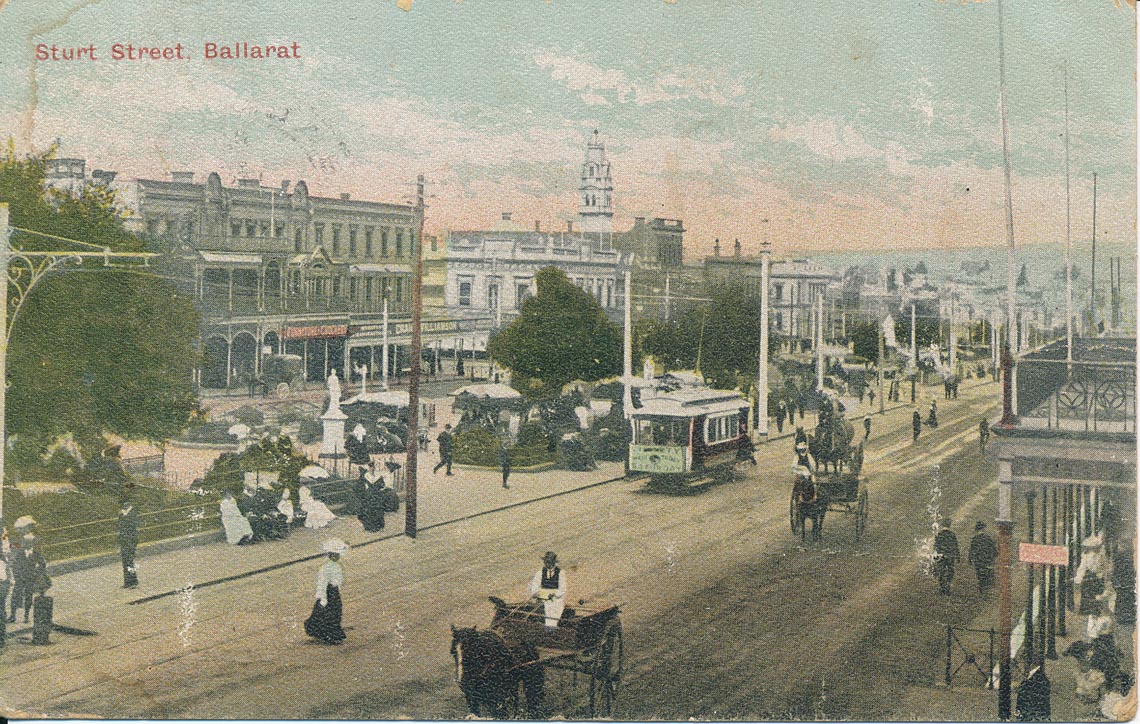 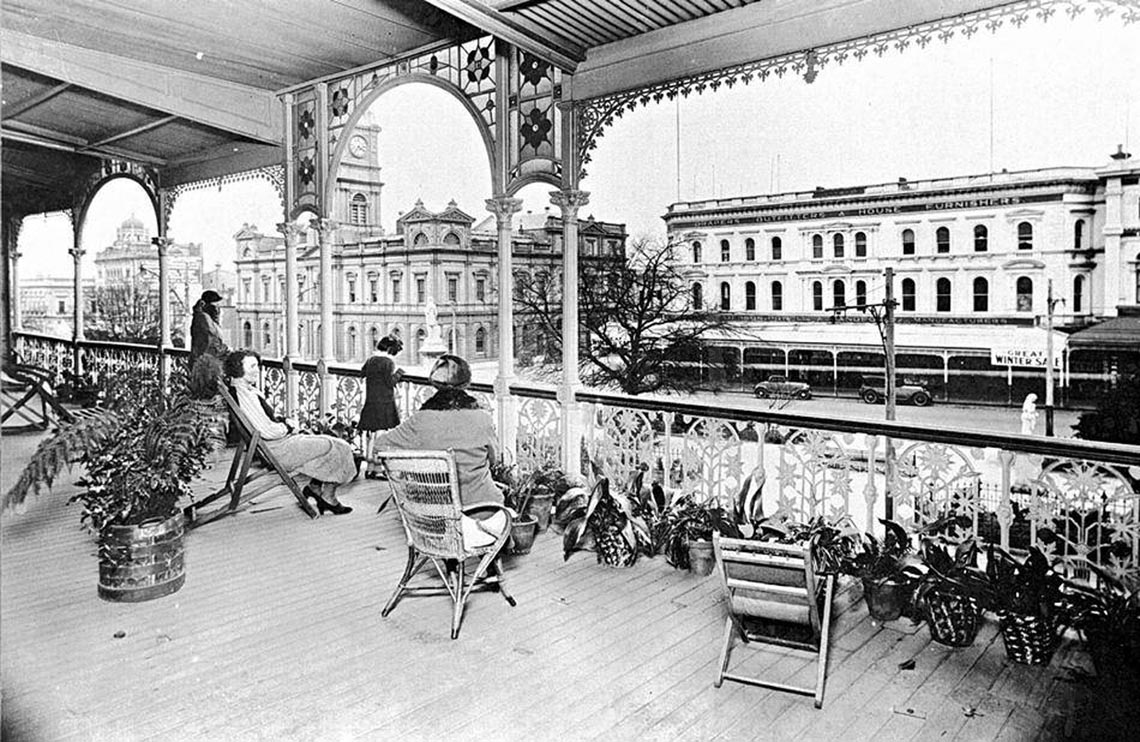 View from the balcony, Lester Hotel 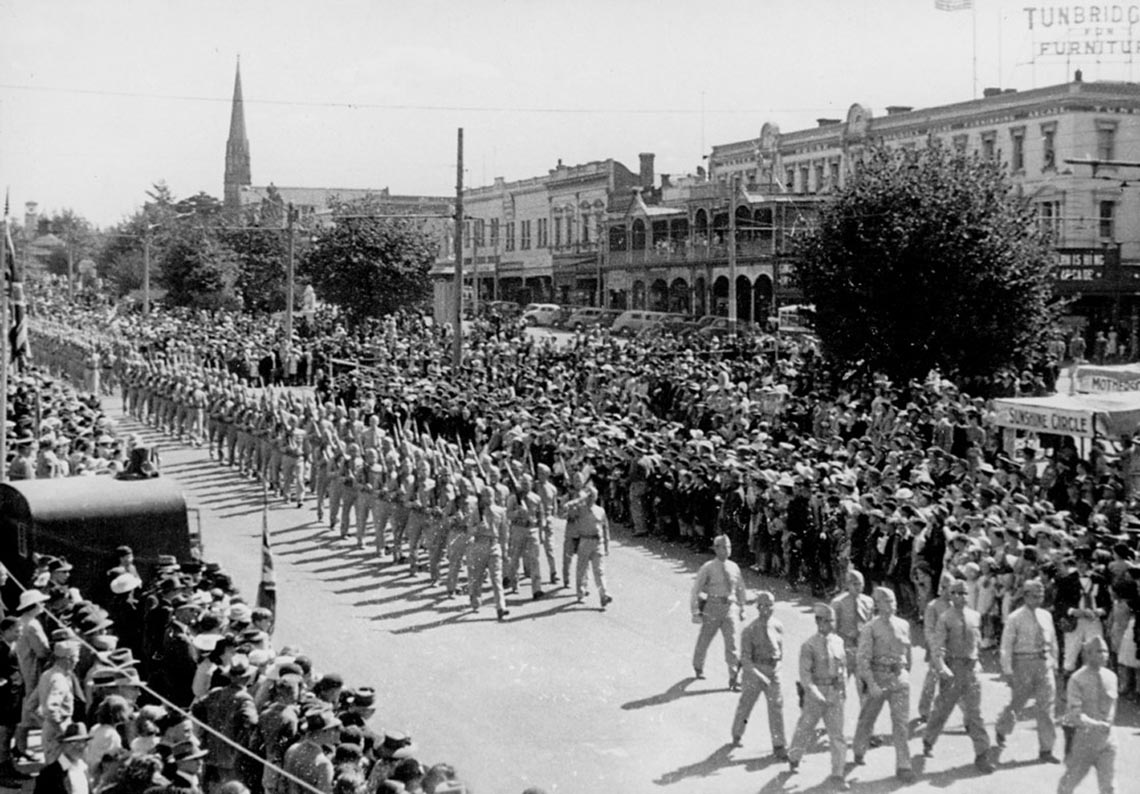 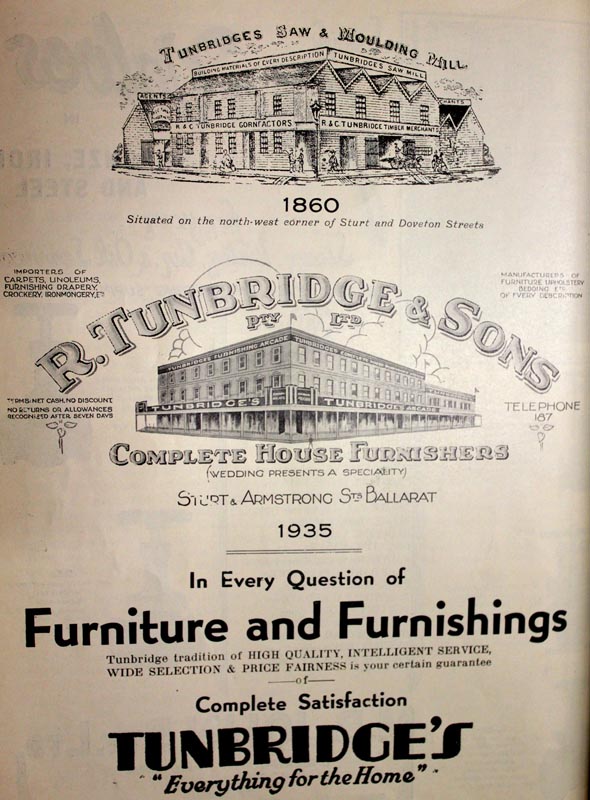 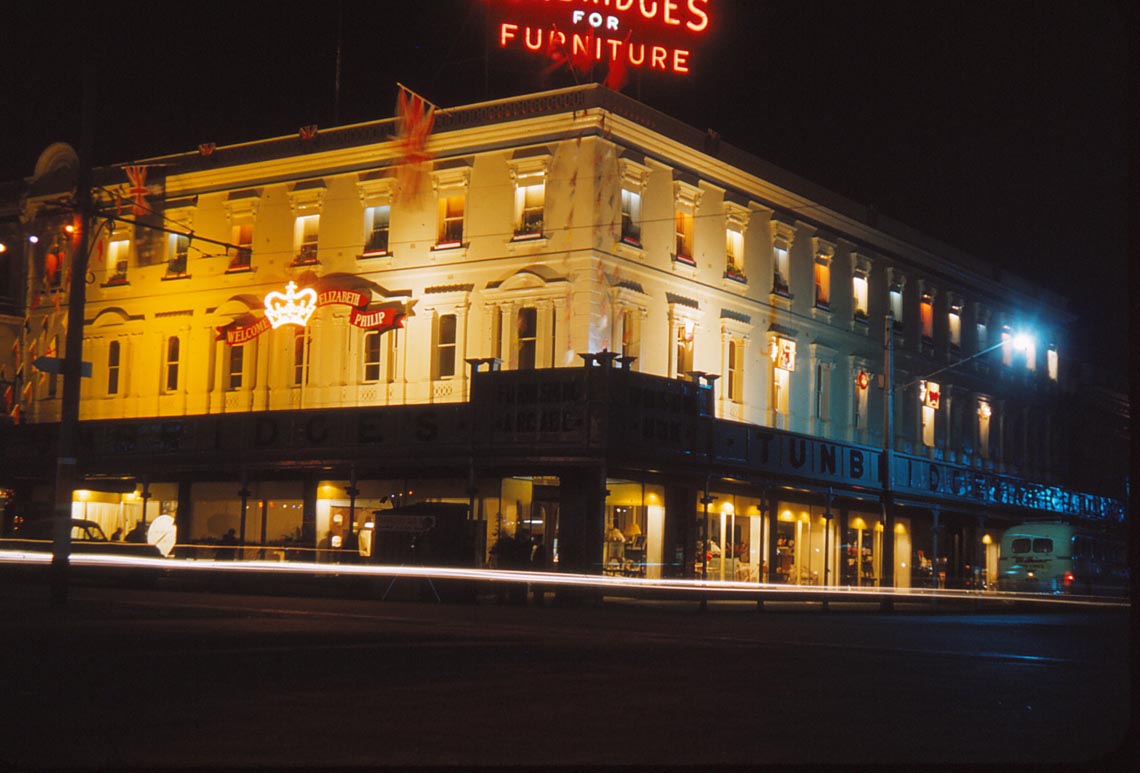