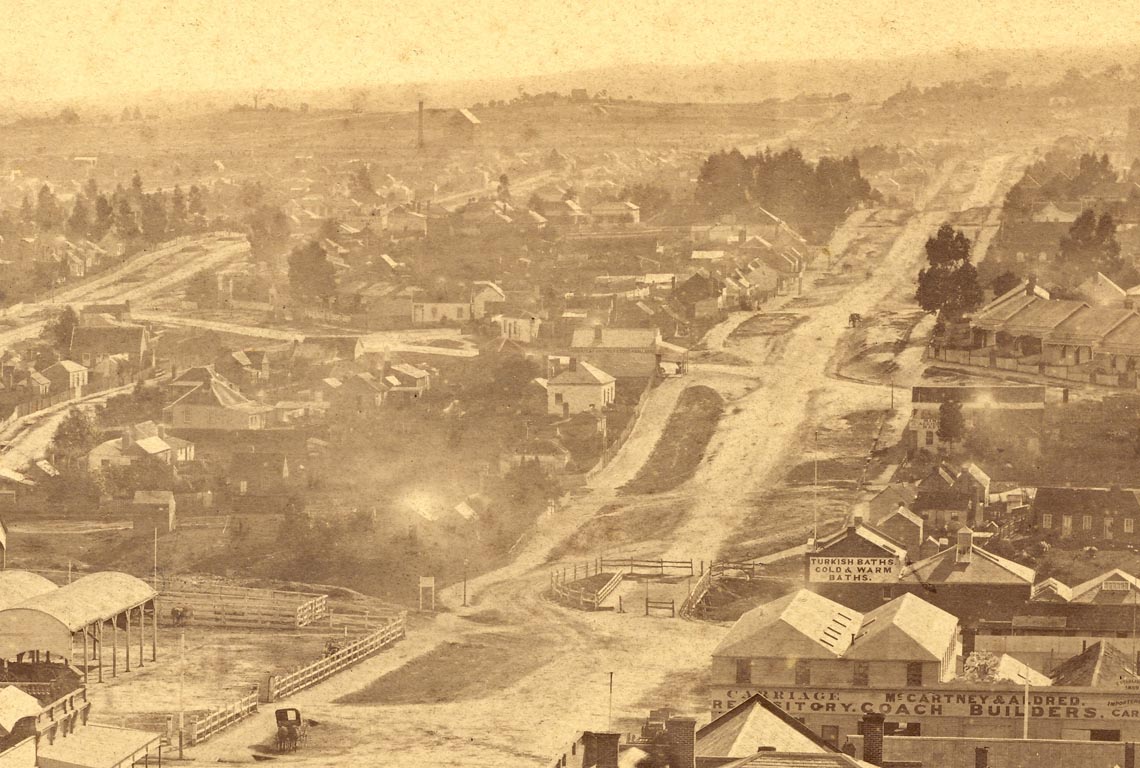 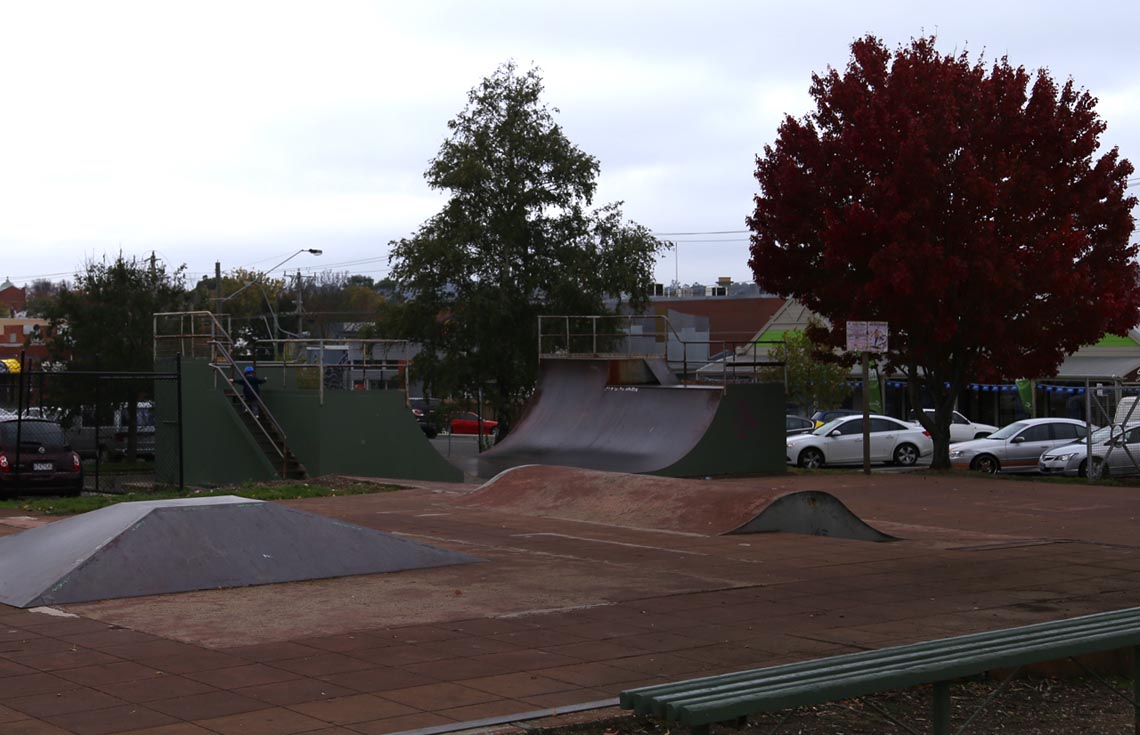 Walk down to the corner of Mair and Armstrong Streets and look over the skate ramp or the Aboriginal flag flying over the Ballarat Aboriginal Co-op; that was once the site of Ballarat's very own Turkish Bath House. Bathing and swimming are not just popular pastimes in Ballarat - one year after Australia's first Turkish Baths opened in Sydney, the Ballarat Turkish Baths opened to the public in Armstrong Street, serving an public health purpose for cold, dusty and dirt covered mining folk living in tents and other places not served by hot water. In 1866 a person could pay one pound a month people to have access to 'Turkish, shampooing and hot baths'.

As the Ballarat Star put it:

"Living as we are, in a highly artificial mode, the ordinary functions of the body have not the chance of maintaining us in a thorough state of health....The peculiar employments of a very large proportion of inhabitants of this district together with the exigencies of the climate and the deficient character of house accommodation, render personal absolution a matter of great importance and difficulty and it calls loudly for amelioration and remedy. "The Ballarat Star Februray 1862

Ironically the Victoria-era Turkish Bath owed more to Rome than to Constantinople; the bather was enveloped in hot dry air, not humid or moist air, in rooms of progressively hotter temperatures, and followed it with a plunge in cold water and a massage.

The Ballarat Turkish Bath Company was part of a fascinating trend in colonial Australia, pre-dating establishment of similar businesses in Melbourne. The baths were located across from the Haymarket, complete with dressing rooms and both a 'frigidarium' and 'tepidarium' - cold pools and heated pools - taken from the Roman tradition.

Turkish baths and vapour baths (saunas) were available, with hot baths offered at first, second and third class rates. Women were offered separate bathing sessions on Monday nights from 8-10pm and Thursdays from 10am until 3pm.

The Turkish Baths operated until 1867 - during the 1860s women of Ballarat signed a petition asking why men were receiving discounted entry on Mondays:

"Your petitioners, whose names are undersigned, respectfully intimate that the partiality of present shown to the Male Citizens of Ballarat in allowing them the priviledge of using the Baths on Mondays at half the usual prices, whilst your petitioners are charged the full rates, seems to them very unfair, and not in consonance with the usual gallantry of the gentlemen to whom this is addressed, and they believe that they have only to present their humble request, that the like priviledges (or as much in access as you may be pleasing to yourselves to grant) may be extended to the female portion of this Community (who may probably require and enjoy a bath as much as their natural protectors) in order to have it granted."

In 1913 Ballarat opened the first public baths for children on Pleasant Street, claiming to have initiated a nationwide movement for building public pools for school children, and in 1928 remodelled as the Ballarat City baths, with further works in the 1930s.

The Turkish Baths later became the Ballarat City Baths and modernised with a new filtration plant in 1948, after many years of complaints and attempts to resolve the issue of keeping the water clean.

Mr N F Spielvogel, president, told Ballarat Historical Society last night that as long ago as 1894 swimmers had complained about the dirty water in the baths. The city council then obtained five tons of salt from Geelong and forwarded it to the baths curator. When this supply ran out he would have to provide a further supply himself. For the first time Ballarat swimmers swam in salt water - until the supply of salt ran out. -The Argus, 1947 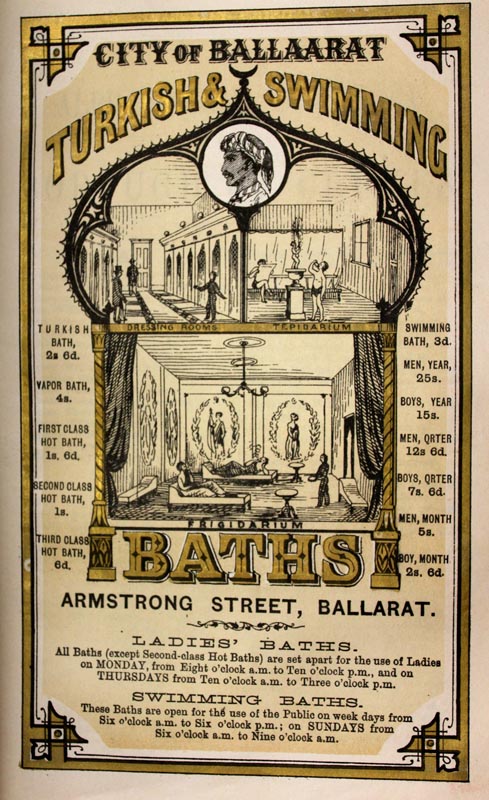 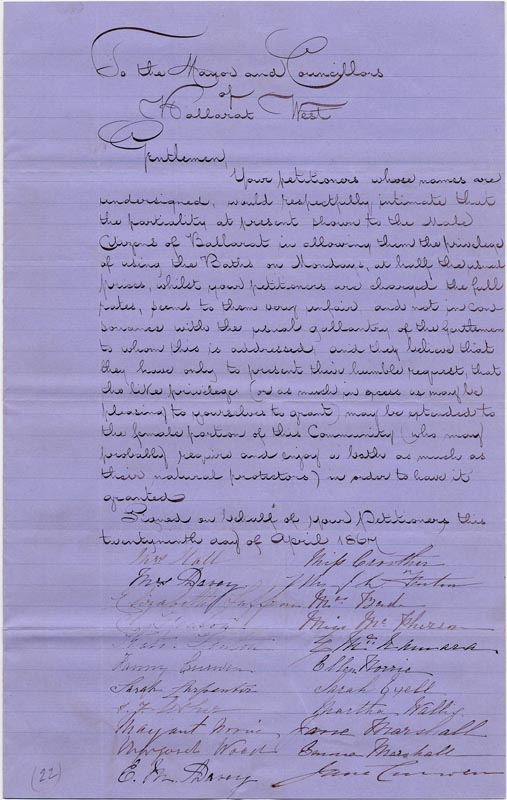 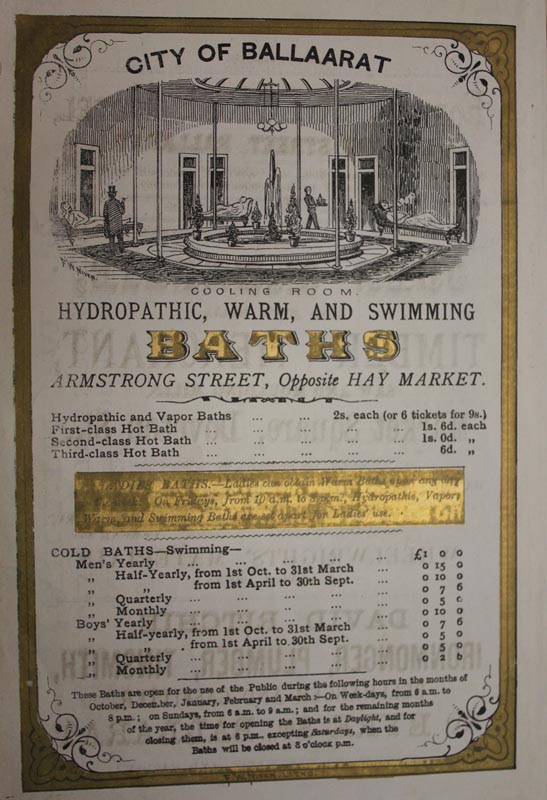 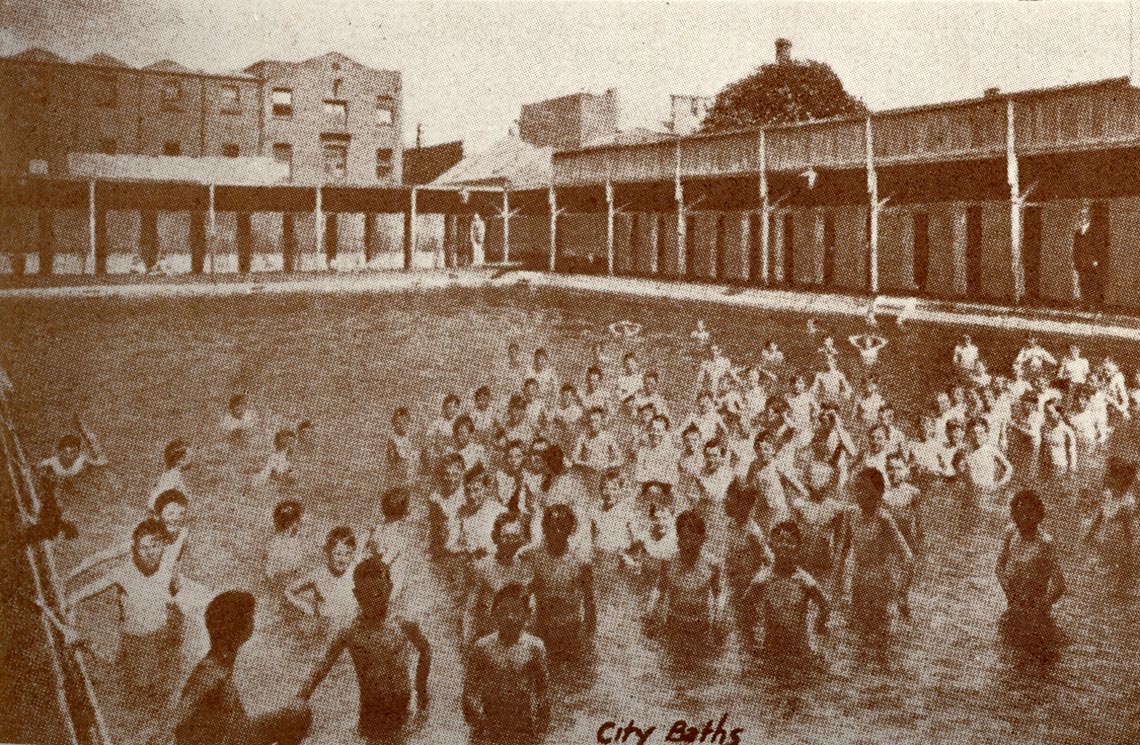