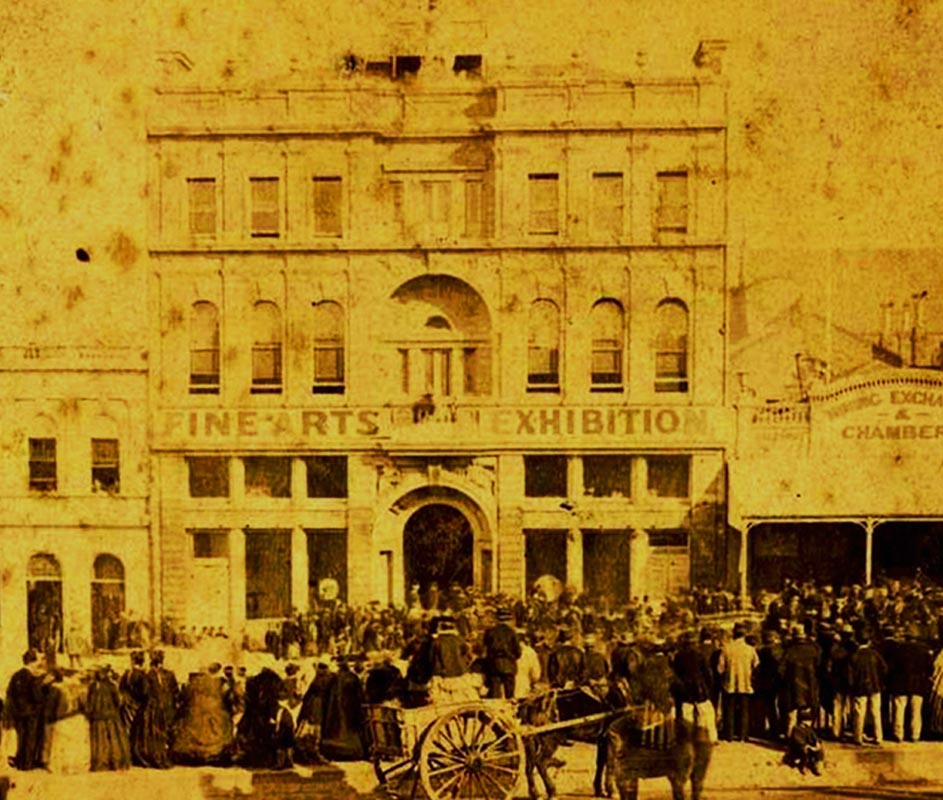 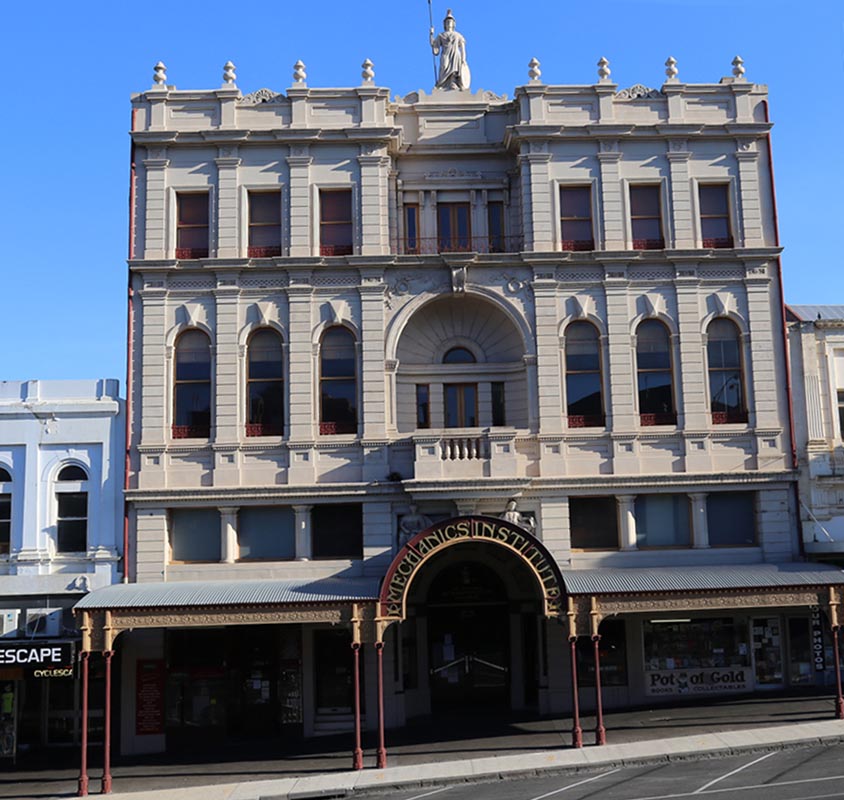 Few buildings have as colourful and illustrious a history as the Ballaarat Mechanics' Institute.
It's seen a century and a half of self-starting thinkers, speakers and intellectuals pass through its library doors, as well as 150 years of live music and dancehall acts in its halls.

It also played a cameo role in the dawn and development of cinema in Ballarat. More importantly, it continues as a hub of knowledge and culture to this day.

Once there were over 1,000 Mechanics' Institutes in Victoria. Now, there are less than ten. The Ballarat Mechanics Institute is one of the few in Australia to be able to claim it has offered the same basic library service and gathering place at the same address for over 150 years.

In 1856 two main groups representing Ballarat East and Ballarat West began competing for a site, and later that year a third group, dedicated to the advancement of humanity, posted the following plea in the Ballarat Star:

"...We have casinos, dancing and concert rooms, to the heart's content - but, to say the least, there is but little to be found there to satisfy the thoughtful mind eager for instruction. I am greatly mistaken if there are not some hundreds on Ballarat who would rejoice at having opened to them some means whereby their mental and moral nature would be improved and benefited."Ballarat Star, 1856

In 1859 two men stepped in to end the feud: JB Humffray established Ballarat's first Mechanic's Institute in 1859 in an upper floor of the Ballarat East fire brigade tower. Thanks to the efforts of former Eureka leader now Victorian MP Peter Lalor, a site was selected on Sturt Street for a purpose-built Mechanic's Institute.

It's the library where a young Henry Sutton would eagerly devour every new scientific and technical publication that came in during his youth; where Mark Twain presented his lecture when he visited in 1895; where some of the first moving pictures were exhibited; and where fledgling independent film-maker A.C Tinsdale and the Austral Photoplay company would begin (but never finish) production of a Ballarat-made feature film called Women and Gold in 1917.

From 1931 to 1957, the first musical director of the ABC and the instigator of state-based orchestras, Ballarat-born William James, presented many concerts here of international and prominent Australian musicians backed by ABC orchestras.

After many decades of operation as a cinema, the Ballaarat Mechanics' Institute has in the recent past resumed musical performances, exhibitions, speeches and presentations. Nowadays you can come to the Mechanics' and see everything from public talks on history, science and biography to Ballarat Foto Biennale exhibits and concerts for hardcore punk bands and the Ballarat Slow Music Festival.

The Institute houses a stunning heritage library and the beautifully restored Minerva Room, pictured here in these illustrations from the 1860s. 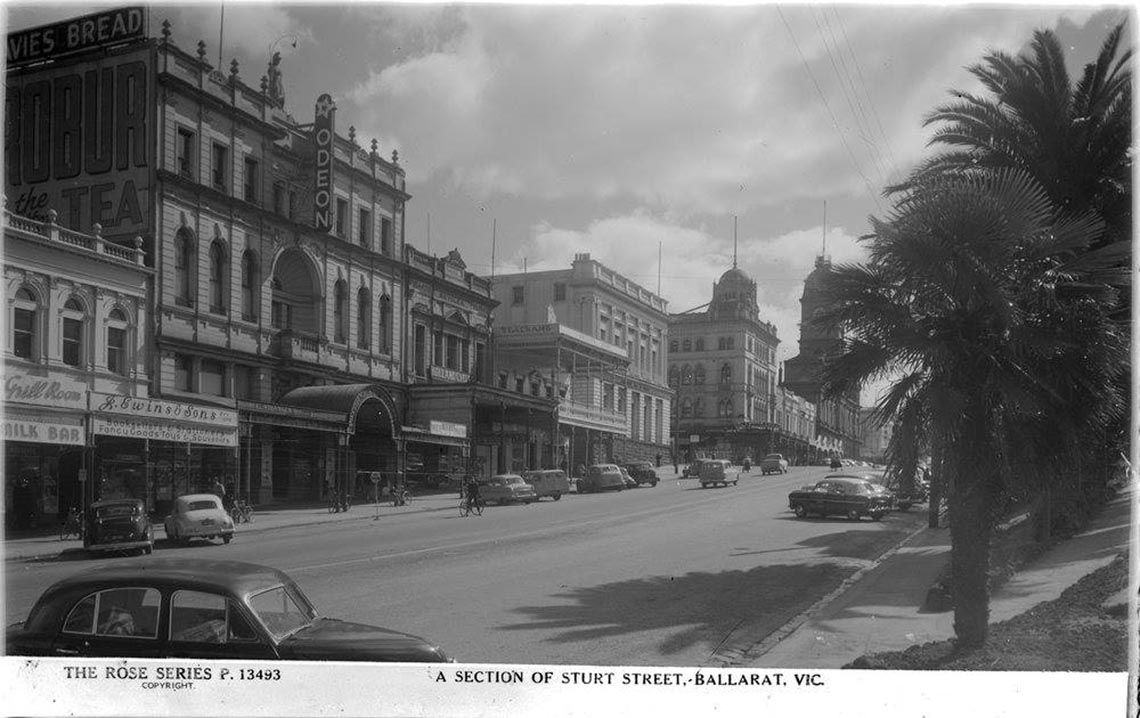 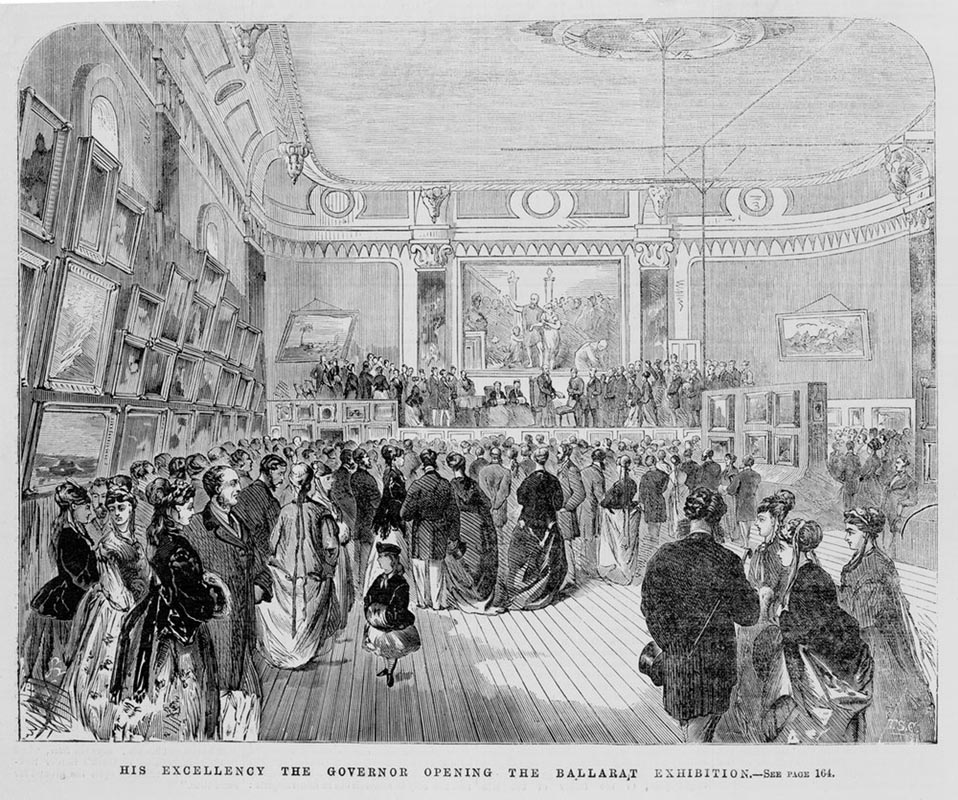 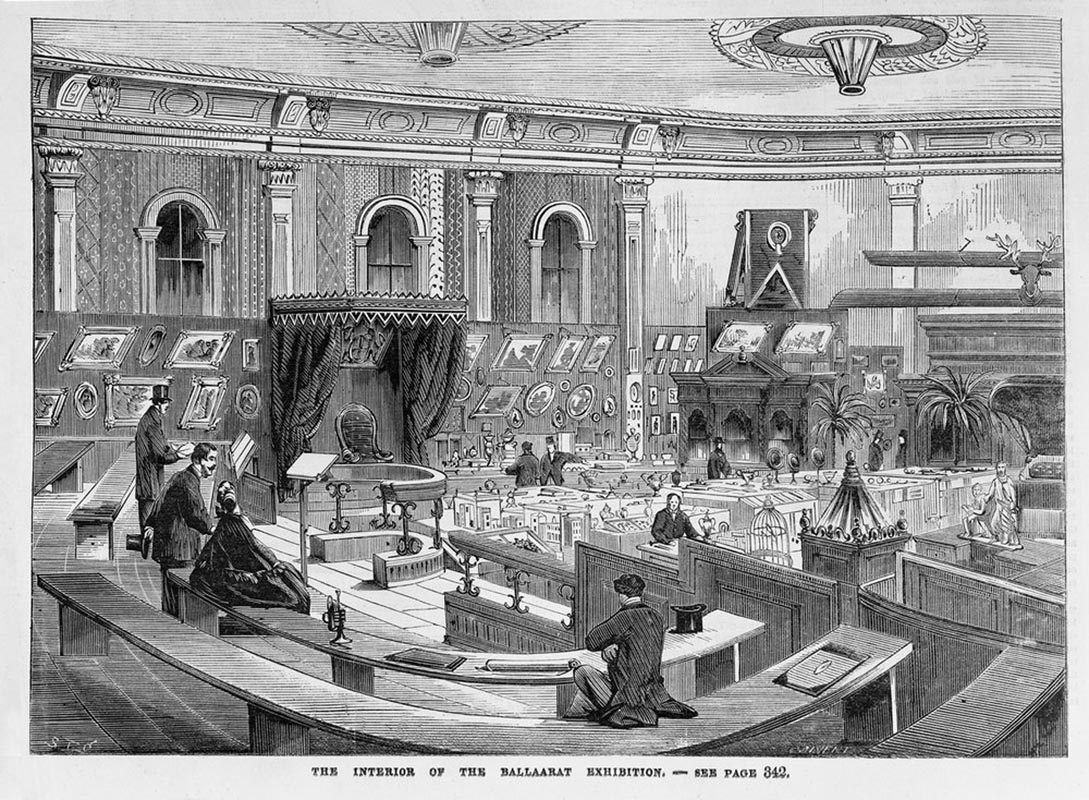 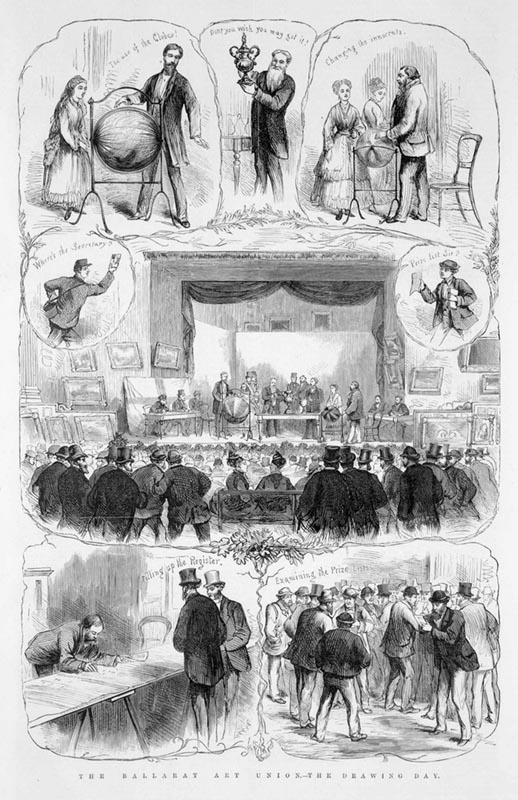 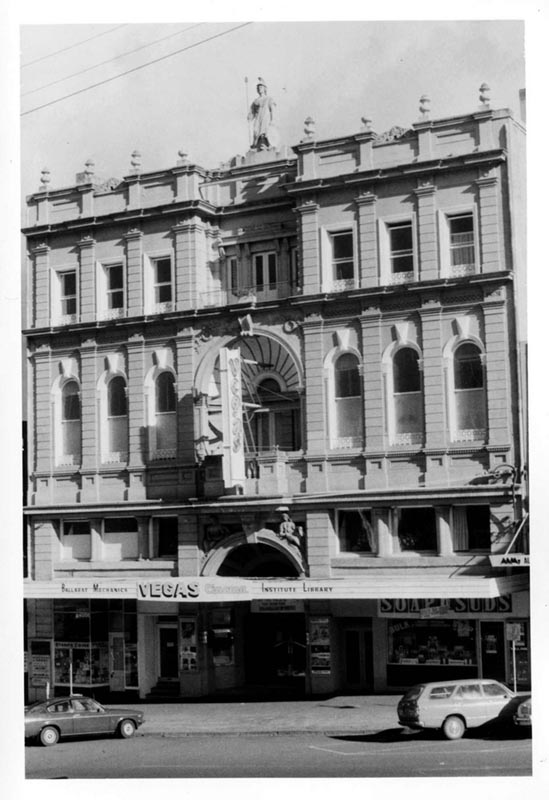 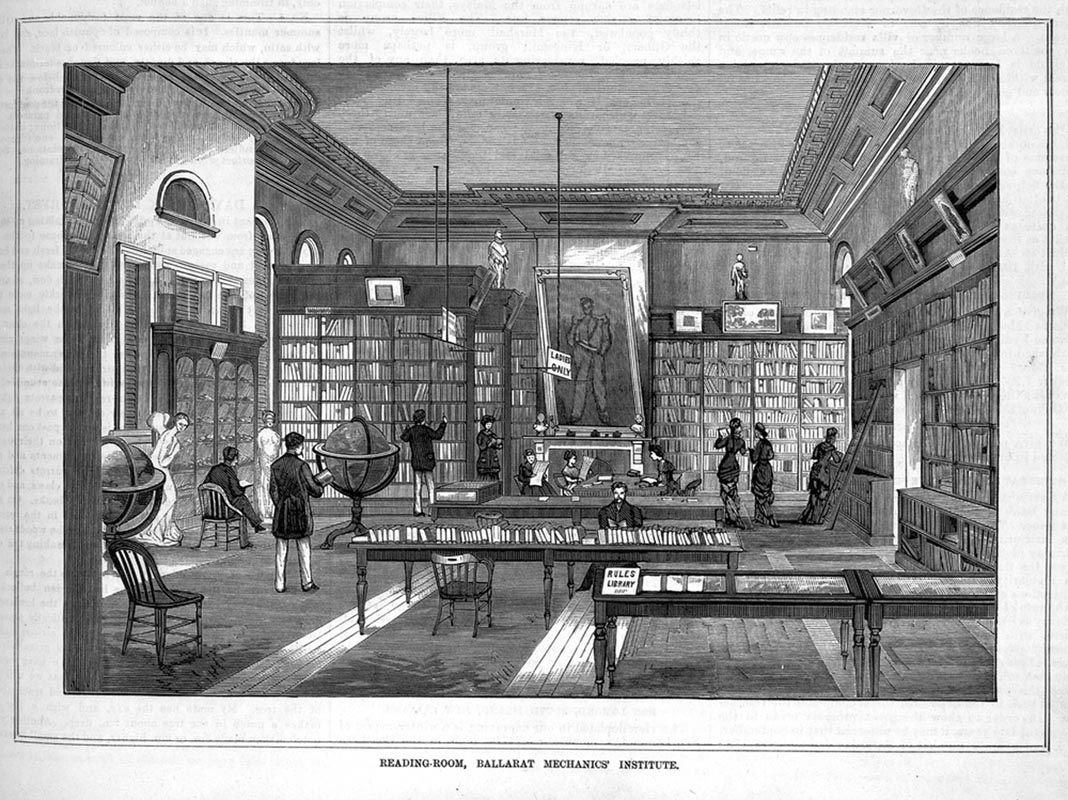